We Can Learn Much from Pope Benedict’s Heroic Decision

Pope Benedict XVI, the spiritual leader of 1.2 billion Roman Catholics, surprised the world on Monday, February 11, 2013, by announcing that he will resign at the end of the month. People announce that they’re resigning all the time, yet he is the first pontiff to do so in nearly 600 years. Benedict, following in the line of St. Peter, Christ’s chief disciple, shared with all mankind that he now lacks the strength of body and mind to carry on in his role as pontiff: “[My] strength . . . in the last few months has deteriorated in me to the extent that I have had to recognize my incapacity to adequately fulfill the ministry entrusted to me.”

In this humble, straightforward message, the Pope showed himself to be an exemplary leader, sending a powerful lesson to religious and secular leaders alike when they themselves face the inescapable question, “When do I step down from the responsibilities that largely constitute the fabric of my life, my persona, and the way that I am defined by society?” Think about this: when you go to a party and a stranger approaches you, what is the first question he/she asks you as a means of getting to know you better? “What do you do?” Defined by our career, our work accomplished daily, and especially by our position in that workplace, we fear that if we resign or retire, we will be nothing.

I have often said that when confronted with formidable issues like retirement vs. staying on, it is easy to be descriptive about the dicey situation, but far more difficult to be prescriptive—saying aloud what you think is the right thing to do in the situation and when to act on that. But the question of what to do when we feel we can no longer continue at a vocation that we cherish may more accurately flip the analysis around. We know the prescription for “inability to perform our duties”—retire, but we have difficulty in describing–coming to grips with the remedy as it applies to ourselves personally, in detail, even though we know intellectually and in general what the correct course of action is.

As I approach the eighth decade of my life, I am still fully engaged in what I love to do. I practice law at a great law firm, lend my guidance to some terrific companies and non-profits, and speak and write on leadership. But there will come a point when my vitality starts to ebb. I hope I will know when I start running out of good ideas! Some continue to be really valued in that role, but others start to run out of good ideas yet stay around the office, not seeing their situation clearly. Of course, countless positions grant lifelong tenures, barring inappropriate conduct. Tenured professors come to mind, as do federal judges, including those sitting on the Supreme Court of the United States. It is not unusual for the court to include several octogenarians. As has the papacy itself, as well as the College of Cardinals.

Then there are those elected officials who come to view their positions as de facto lifetime appointments, something like Papa Doc, “President for Life.” And we the electorate pretty much acquiesce to their expectations. Clearly, some of our political elders still lead vigorous lives, but others remind me of the immortal Castilian military commander Rodrigo Díaz de Vivar. Known as El Cid, he, after his death, is thought to have been secured to his horse to lead his troops into battle. Some folks really do hang on too long, but knowing when to step aside is a complex issue. Our psyche jumps through a lot of hoops as it tries to find an acceptable course of action. Rational and often apparent answers elude us. I don’t know when my moment of reckoning will occur, just as I don’t know when my moment of recognition will occur, telling me in an instant that it’s time to step aside, “to find a new career”! I just hope that at that moment, I have a single grain of the moral, spiritual, and practical wisdom possessed by Pope Benedict. And some self-effacing humor, too! That really helps because the spectre of El Cid, “Dead Man Riding,” is a discouraging role to play, convincingly inspiring the troops, surely, for no more than ONE battle.

In Monday’s talk from the Vatican, Pope Benedict showed himself to be a man of extraordinary courage and one possessed of an even greater measure of humility. Yet, who better than the Vicar of Christ to recognize and demonstrate to us that the Creator does not judge the frailty of His mortal offspring. He leaves that to His children on earth and probably chuckles at our pomposity and lack of restraint in judging others for their natural frailty. You may think that humility is pretty much a given for a Pope and that all must possess that virtue. But our humanity tells us that the need to rise to the pinnacle of any calling can be an intoxicating potion!

Understand, I don’t view setting lofty goals to be an unconfessed sin. In fact, in most ways working toward high achievement is a worthwhile and constructive endeavor. The problem comes when we see our attaining certain titles and responsibilities as being akin to a coronation–much like a royal, we are difficult to dethrone. When the rational brain proposes a discussion of our continued competency at any chosen endeavor, the emotional brain floods the intellect with a turgid sea of defensive rationalizations. Just realize that when the floods come, we need to wall them back with a healthy dose of humility. 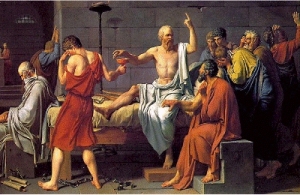 Historians have long speculated on why the philosopher Socrates did not flee Athens after being wrongly charged with acts against the state and sentenced to take his life. Instead he dutifully drank the penitential hemlock. The noted biographer Paul Johnson writes that Socrates so believed in Athenian democracy that to flee would have gone against his love of that Athenian democracy. Any other response, such as exile, would not, “uphold the dignity and sovereignty of Athenian law,” so he “[was] willing to die as an affirmation of the principles by which he had striven to live.” Socrates subordinated his own life to what he perceived as a greater good. Is it not the same with Benedict?

In acting upon his decision to resign, Benedict also shows himself to completely understand the obligations of his ministry and the essence of the job. On this point my friend Howard Rockett provides an insightful observation: by his resignation Benedict shows he understands that the Pope is most of all the representation of Christ on Earth. While not a biblical scholar, I am unaware of any mention in the gospel of Christ having ever written a letter or authoring any other document.

Rather, as the Good Shepherd, he was physically present to his followers as he taught through word and deed. I have often marveled at the effect the Pope has on those fortunate to have stood in his presence. I have spoken to Catholics and non-Catholics alike who consider an audience with the Pope to be one of the most meaningful events in their lives. Like many of you, I watched much of Benedict’s visit to New York City. As he walked through a crowd of the faithful, a woman touched his robe. I can still recall the look of joy on the woman’s face. By traveling to New York, the elderly Pope had, in his physical representation, brought the love and mercy of Christ to individuals in a real, even tactile way, thus inspiring and strengthening that one woman’s faith, just as Christ himself worked and walked among the people as he traveled the Holy Land.

Thus, in an act of astonishing wisdom, Benedict recognized his inability to act as Christ the evangelist did. He recognized that the Pope is not of the people, but must be with the people! And so he resigned, like Socrates, for the greater good of those whom he serves. By doing so, he does not shun his responsibilities but illuminates his fidelity to the papal ministry. The declaration of his limitations is not a defeatist manifesto, but a verbal recognition that by dispassionately assessing our abilities and limitations we show, in humility, the greatest possible strength of character, strength of understanding, and reverence for our responsibilities.

Yes, it is strong and fine to recognize one’s true, undeluded physical and mental abilities and then to act upon the recognition. Remember that Christ, Himself, understanding that “Peter” means “rock,” renamed the man then known as Simon Barjona as the disciples walked on the coast of Caesarea Philippi: “I say also unto thee, That thou are Peter, and upon this rock I will build my church; and the gates of hell shall not prevail against it.” (Matt. 16:18). Pope Benedict, then, is an able and insightful—and humble—descendant of St. Peter, the Rock of the faith, and he gives us a living representation of how to be faithful, strong, and authentic as he announces his retirement.

One final point. In lauding Benedict’s decision, I am not by implication claiming that one or more prior pontiffs should have also done so. We all vividly recall the infirmities that gripped Benedict’s predecessor John Paul II, in his final years. Some may have thought that he should have resigned. If so, they miss the point of John Paul’s public exposition of his illness. At that moment John Paul choose as his ministry to display another facet of Christ-like humility. He gave us to realize that even the direct descendant of Peter may be called upon to suffer. His teachings in that respect are both profound and lasting.

As Andrew Nagorski, writing in The Wall Street Journal, says of Benedict’s decision, “There can be no greater tribute to the institution a leader serves than recognizing when the moment has come to step down. That is exactly what Benedict will be remembered for.” The deep and precise wisdom in Benedict’s decision is one all responsible leaders can well consider.