The Heroes Among Us

One of my talks that I really enjoy giving is titled, “We Are All More Than We Seem”.  I remind my audience that when looking for heroes, we often start with the ranks of the sport and entertainment superstars we see on the TV or in the movies.  While some of these folks qualify as heroes given the time they give to noble causes, there is a better place to look. The fact is true heroes are usually no further away than the next cubicle, the house next door, or the individuals that daily gather around your kitchen table. In my case, I didn’t have far to look as I married my hero-perhaps heroine is more appropriate. Simply stated, my wife Jean Anne is among the most remarkable individuals that have blessed my life. Jean Anne is an intelligent compassionate woman, but what I admire most is how she has come to distill down her life experiences into powerful insights- lessons that she freely shares with others. As proof I would like to share with you a blog that Jean posted this week-one that I particularly like. You can read all of her blogs and those to come at  http://CreatingPositiveAffirmations.blogspot.com/

Affirmation: I embrace stepping outside of my comfort zone.

I’m a huge fan of the TV show Dancing with the Stars. I’ve been a fan since the very beginning. I jokingly say it’s because there’s no sex, violence or foul language. I can watch it with my grandchildren or my mother. How many shows are out there that meet those qualifications? I also love to dance. 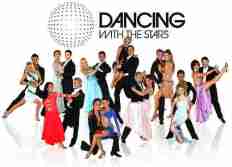 On the show, about a dozen celebrities learn to dance different ballroom dances with a professional dancer. They get to wear these sparkly, colorful, fun costumes and learn a new dance or two each week until the final week when one of the couples is declared the champion for that season and they get the famed Mirrorball Trophy. It’s such fun to see the people progress. I find it very inspirational. Sometimes there are celebrities who have serious disabilities but they don’t let that stop them. In 2011 TJ Martinez won the title. He was a wounded Iraq war veteran with serious burns to his whole body, including his face. He actually lost an ear in the explosion. Did that keep him from giving it his all? When I watched him dance and saw the joy that emanated from his whole being, I completely forgot about his disfigurement. I obviously wasn’t the only one because he was that year’s champion.

Sherri Shephard, from the TV program The View was one of the contestants this year, 2012. She was determined to do well. She wasn’t a little lady and I could only imagine how mentally and physically challenging it was for her to learn those dances. She really wanted to win. She was traveling between the show she regularly hosts in NY City and the Dancing show in Los Angeles. It must have been a grueling schedule. I know she had all the advantages that money can provide but it doesn’t lessen the hard work she had to put forth. She was eliminated in week four. She cried and cried. But, before they could say goodbye, she had something she wanted to share with the viewers. “If you don’t go towards the thing you fear, you won’t be able to say you lived.” She went on to say that you should run towards that thing you fear because what you’ll find on the other side, is simply amazing.

I mentioned to several of my friends that I was somewhat afraid of my upcoming trip to South America. One of them said, “Oh, Jean, that’s great! Because when you come home, you’ll feel so good about what you’ve done.” I know she’s right. Her comment gave me a sense of optimism and excitement, instead of dread and anxiety.

My husband and I did an Outward Bound in 2000. We spent 5 days canoeing through the Everglades. Now, I want to share that I am a city girl. I was raised in Queens, New York. Our home was on Grand Central Parkway. I mean, right on it. I was riding the buses and the trains by myself by the time I was 10. The “country” was the property fenced in around the hospitals that bordered our three block neighborhood. And now, I’ve been invited by my husband (born in Brooklyn) to go on an Outward Bound. He was on the Outward Bound board and thought this was a good idea. I got a tape about the Everglades. There were snakes and alligators, not to mention other creepy crawly things. But this was the year after I finished treatment for breast cancer and I figured if I could go through that, I could probably canoe through the swamps. I invited a friend to go with us and she was shocked, “What is the purpose of this excursion?” Well, if you needed to ask that, I figured you really didn’t need to come along.

So, we went. We brought along our son who was in his twenties and our teenage daughter. The good news when we arrived was that we weren’t going to be in the swamp, we were canoeing through the Thousand Islands. Whew!! On our first night we had to create an island. We took boards from the bottom of the canoes and lashed them together on top of the canoes. This was our “home” for the night. My first night to ever sleep outside, outside under a sky that had more stars than I had ever seen before. I learned a lot during those days. I learned that my daughter was an amazing person. She never complained. She just did whatever was needed, my son too. My husband was as kind and gracious in the wild as he is in civilization and I learned that I could be an indian or a chief. I could both follow and lead, whatever was required. And, I learned that I could survive in a situation I never even imagined. Now, when Sandy and I find ourselves doing something that’s challenging, outside of our comfort zones, we refer to it as an “outward bound experience.” It’s funny how often we find ourselves in that kind of a position. The purpose of going outside of your comfort zone it to empower you, that’s the purpose. Life is challenging, there’s no two ways about it. The only way to bolster your confidence is to do those things that frighted you, “to run towards them” as Sherri said. You not only receive the gift of empowerment, many times you find joy and fulfillment from making your way to a whole new place.

Fear is a debilitating disease. I believe we make more decisions based on fear than any other reason. It needs to be recognized and overcome. There’s a wonderful tale about a guru who treks all over the land, sharing his wisdom and compassion. One day, he decides to return home. When he walks into his house, he is met by several huge ferocious monsters. They are drooling and their fangs are bared. He looks at them and asks, “Why are you here? What is it that you need?” and half of them disappear. He then asks the others, “Why are you here? Is there something I can do for you?” and they disappear, all except one. He is the biggest and the most frightening of all of them. He is growling and hissing and drooling but the guru is calm. He goes up to the monster and he puts his head into his mouth and with that, the monster evaporates.

This is the challenge; to face our fears with love and compassion, to put our heads into the monsters of life. Sometimes we get to choose our outward bounds and sometimes they are thrust upon us but if we have faced those events that take us out of ourselves and we’ve survived, we will be as prepared as possible for those events that we never even imagined.